Marcel E. from Belgium (12/03/2013), on receiving his order : «Thank you so much. I’ve received the parcel. I am delighted to have found your website. Great music, and it is so enjoyable to go through your explanations and information. Yours truly, Marcel. »

Kate G. from New Zealand (21/01/2013) : « …thanks to internet I can watch groups in France and Europe. I notice many of them fail to stress movement quality and an overall flowing impression. Chestnut obviously does. Your work really takes into account the basic requirements of English country dancing, and the result is great to watch. It really inspires one to work towards mastering dances the way you do. I am sending an order for one of your CDs and the leaflet of explanations (Les oubliées)… »

This 29-page brochure describes 16 dances and includes a glossary of 35 terms as well as two articles  on the main figures of English Country Dancing : J. PLayford and C. Sharp. It goes with CHESTNUT’s n°1 CD: « Chestnut Les Oubliées ». 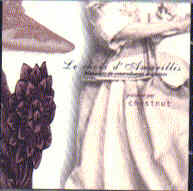 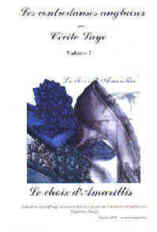 This 58-page brochure is a new, augmented edition of the leaflet published in 1985 by the now extinct Compagnie Amarillis (artistic director, Cécile Laye), with the description of 19 dances, a glossary, many notes, historical and choreographical comments on how to render the dances. It goes with CHESTNUT’s n°2 CD « Le choix d’Amarillis » (out of print). 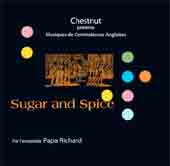 This CD is as pleasurable to listen to as to dance on. As the name suggests, the dances were chosen for their contrasting tastes, colours, atmospheres. Dancers will be pleased to know that each tune starts with a chord or call phrase, that each is repeated as fits the choreography and that each time, the tempo has been chosen to fit both the atmosphere and the most appropriate way of dancing. « Sugar and Spice » titles: Saturday night and Sunday morn, Blew Cap, Pretty Miss, Ethel’s Dance, Lady in the Dark, Rufty Tufty, Speed the Plough, Kettle Drum, Market Day, Charming Maid, Staines Morris, Dargason, Waltz Country Dance, Northern Nancy, Row well ye Mariners, The Maid Peeped out of the Window, Draper’s Maggot, Windy Morning.

In this 50-page brochure one finds a description of all 18 dances recorded on the « Sugar and Spice » CD, plus a glossary and several articles by Cécile Laye : « Longways for as many as will in Playford’s first edition », « The Playfords : printers and sellers of books », «Cecil Sharp and dance collecting ». It goes with CHESTNUT’s third CD: « Sugar and Spice».

Longways for as many as will” are the very heart of a country dance ball. Just as « mixers» they draw together people who do not know one another and might not otherwise dance together; but they are far more elaborate. Progressing up and down the set makes the dance interesting; as the dancers repeat the figures, they get over the initial difficulties and eventually take pleasure in recreating each figure with new neighbours. CHESTNUT and the Papa Richard musicians are happy to present this new selection of 17 tunes for dancing. Except for The Toddler and Black Almain, all are “longways duple or triple minor set”, most of them taken from different editions of the Dancing Master.

It was not easy to make a choice among so many enticing possibilities. What should be dropped? We tried to take into account newcomers to the repertoire as well as of experienced dancers familiar with the sequences. We picked up dances wich offer a contrast in atmosphere and rhythm presenting a representative sample of the different sequences used in progression dances. But above all we let ourselves be guided by the beauty and variety of the music, in carefully choosing the instruments which would best enhance the poetry unique to each dance.

This 71-page brochure describes all 17 dances recorded on « The Toddler », with a glossary and three articles by Cécile Laye « A few considerations on progression, Dancing in the Inns of Courts and Mime Dances published by John Playford ». It goes with CHESTNUT’s n°4 CD « The Toddler ».

“Chestnut is a dance group located in Paris. So far they have produced five CDs. The Toddler contain a selection of classic English dances from Playford and Fallibroome. Are there sufficient unrecorded dances on the CD? Is it worth acquiring these CDs? The answer to both these questions is ‘yes’. There are seventeen dances on The Toddler with very lively playing using a range of instruments from recorders, cornemuse (French bagpipes) and mandolin to jew’s harp, accordion, double bass, violin and piano. Six dances receive a first recording: The Black Almain, Doway, Enfield Wash, Nancy’s Fancy, Vienna  and The Toddler.  Of the dances for which recordings already exist, Greenwich Park, Mad Robinen Old Noll’s Jig are good to dance too.” Anthony Heywood

From Cécile Laye and CHESTNUT here are, in their 5th CD, 17 titles from John Playford’s first four editions of ‘The Dancing Master’. Thirteen of them come from the first edition (1651), three from the 1657 edition (3rd A) and one from the 1665 edition (3rd B). There is also a dance from the fourth edition (1670). It is to be noted that two dances published by John Playford in those editions were already to be found in the 1648 “Moot Book”, one of the Inns of Court manuscripts.

This recording echoes the ten dances performed on period instruments in our second CD, “Le Choix d’Amarillis”. Then, as now, we have chosen instruments that could have been played in the period considered – the first half of the 17th century. English country dances are three-tiered: they include the old repertoire, traditional dances and modern choreographies. It is an open system, with new choreographies added through the years – an encouraging sign of vitality. There is, however, a drawback: with so many attractive new dances, older ones could be put aside as somewhat too predictable. They are invaluable, however, as a way of understanding the basis and structure of the whole repertoire. We deeply feel the John Playford dances are worth dancing, worth teaching, worth putting on ball programmes. We have stayed as close as possible to the manuscript texts, in particular for the number of repetitions. To our way of thinking, the choreographies must be allowed to deploy fully, which means respecting the number of repetitions and the complex architecture of the dance. We also chose to respect John Playford’s proposals as far as melodies are concerned. Our musicians endeavour to help dancers memorise their moves through the use of musical variations. The present recording may be listened to, danced to in casual wear or costume dress, in balls or demonstrations. May the beautiful repertoire that has come down to us from the reign of Queen Elizabeth I be now also taken up by new generations of dancers.
Cécile LAYE June 2015

“Seventeen dance tunes ( including Step Stately) from early Playford editions of The Dancing Master are played on period instruments by the French band Chestnut. They relate to dance reconstructions by Cecile Laye who is responsible for the accompanying notes. Cecile and Chestnut have organised English Country Dance events and courses for many years in France and England for a significant number of dedicated dancers. My initial reaction on hearing about the CD was one of interested anticipation; this transformed into delight and inspiration on hearing it.Those actively involved in the English Dance community know that, with the plethora of modern compositions, the old repertoire has been somewhat neglected. Few current events include dances from this collection. Now we have the inspiration to include some of these attractively played versions in future programmes. The various combinations of solos, duets and other groupings from the band result in interesting and attractive danceable versions of these classics. This is a really great collection which offers callers and dancers alike the chance to be encouraged to include some of the old dances, duly refreshed, in their programmes.” Robert Moir in English Dance & Song

“I had great pleasure listening to the Step Stately CD. Its music is light and lively, especially the jigs (with a happy choice of alternative melodies). The flute players are excellent, with a brilliant interpretation of “Shepherd’s Holiday” in particular. I am very interested in the dances out of John Playford’s 1st to 7th editions: I consider them the very foundation of the repertoire and I often taught them myself. I was therefore quite happy to find in the CD some of my favourite dances, such as “Lull me” and “Spring Gardens”, as well as two dances I never had occasion to perform myself.” Philippe Callens

Welcome to the Chestnut shop! You will find our CD albums and their respective paper brochures describing the dances they contain. To purchase the albums and brochures for download, you will have to go to our shop on Bandcamp. Good shopping ... and good dancing! Dismiss